Is Indian Tourism about being emotional ?

As I choose to write my first-ever post, I select a place named Gaya in the state of Bihar. Gaya is a wonderful place, and is a city “frozen” in time. It is wide known that the Indians take pride in their family values; how they have taken care of their parents and also the vice versa. But I have often wondered, how such family values would have developed in a civilisation?

One of the answers, I found was in an age old ritual at Gaya, of offering “Gaya Sraddha”. This ritual in its core, connects the current generation with its old generation or its ancestors. A person would come to Gaya, may be first or the only time in his life, for his ancestors. He does not belong to this place, yet performs this ritual (it might take from 1 day to 30 days) in a constant dialogue with himself. Imagining his state of mind, wherein he is constantly in the memories of his lost father, grandfather and many more (who he may not have even seen).

One can only imagine the experience one might have, performing this ritual? One is expected to lead a pious life during this period, and be devoid of any worldly pleasure, even cook yourself. While remembering the relationships with your father, you might make many confessions to him, silently! You might break down, cry in a corner … might make certain resolutions for the future. But sure, you would be relieved and recharged, after you established this connect.  All this ’emotional’ and very ‘personal’ exchanges happen, in this unknown place. What a strange city! A city, that can make you cry! I often think, the importance of this experience and the moral upliftment, this city contributes? 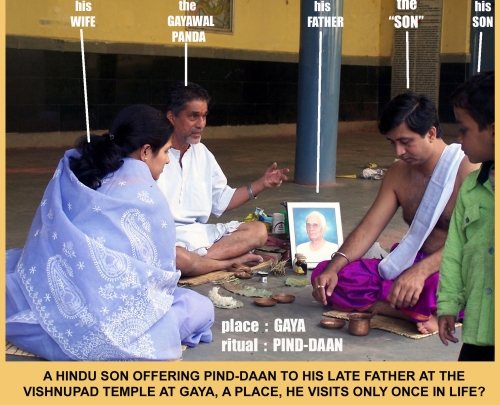 In the displayed picture, a son is performing this ritual “Pind daan” for his father at Gaya. He is accompanied by his wife and his son. Irrespective of the varied regions in India, its languages and sub- cultures, this son pays homage to his parents at Gaya. What kind of an example the ritual presents to the society? What should his children learn from this experience? Would it not motivate them to continue with these core Indian values, of having a connect with our old parents? I often remember my father telling my mother, that she should treat my grandmother the way she expected her to be treated as she gets old.

I was bewildered to learn one written account from the Cambridge University Library. A person named as Veeraswamy, came to Gaya from Madras in 1830. There were no Airport then, nor were any trains or even the vehicles on roads. He travelled often by foot, and it took him 15 months to perform this ritual or pilgrimage and return back.  He also writes that it was not only him, but more than 1,00,000 people came to Gaya in 1811, to perform this ritual. I wonder, what would have been the “emotion” to travel this far?  What do we say about this Hindu belief that “a son, is a son only when he perform this ritual at Gaya”, for his ancestors? Has this contributed to the Indian Values? If it has, what should Indian Tourism do today, to make more people visit Gaya, and inherit these values?

There are many examples, which indicate the people have always travelled in India, often have been guided by such emotions. We all know that religious tourism is the biggest factor for domestic tourism in India. Do you also feel the essence of Indian Tourism is “in being emotional”?

I feel that this is how, India can be experienced best! In its core values, Indian Tourism has a lot to offer to this world.